From the political marketing experts at Arena

In the age of short attention spans, interactive advertising is often the answer to creating engagement. By definition, an interactive ad is an ad that uses online or offline interactive media to communicate with consumers and to promote products, brands, services, and public service announcements, corporate or political groups.

Examples of commonly used interactive advertising include: virtually trying on an item of clothing or glasses; 3D virtual tours in apartments; or the opportunity to explore an item by dragging and/or turning the frame to view from different angles.

Creating interactive advertising presents a unique challenge, but its use in politics has great potential. Politics is an area that so many people choose to ignore. Often, this is because of the complexity of the topic and the vast amount of conflicting information available.

Creating interactive advertising presents a unique challenge, but its use in politics has great potential. 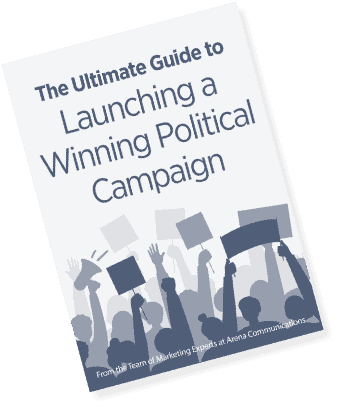 Our free monthly newsletter will keep you up to date with the best practices in digital advertising and direct mail—especially as they pertain to political marketing. Sign up and we’ll send you a complimentary copy of The Ultimate Guide to Launching a Successful Political Campaign.

Oops! We could not locate your form.

Interactive advertising is a way to test the political intelligence of an audience and get to know that audience better. This idea is often used in political questionnaires, but interaction goes so much deeper than just a simple questionnaire.

Because politics isn’t selling a consumer a product, but rather trying to engage them, the interaction requires a much different call to action. This is why social media is so successful: it allows the consumer to engage by “liking” or “commenting” rather than just being exposed to a photo with no opportunity to interact with it.

In the same sense, people surfing the internet usually want to engage with fun puzzles or quizzes rather than just an information session. This is where political advertising can turn itself into a game rather than a chore.

Using a “choose your own adventure” game as a model, consider that consumers could be served a “choose your government” game questionnaire. They might be presented with day-to-day situations and/or questions along with an option to “choose their destiny.” Once completed, the consumer could be lead to an ad that endorses a specific candidate and demonstrates how the candidate shares the same “destiny.”

Once completed, the consumer could be lead to an ad that endorses a specific candidate that demonstrates how the candidate shares the same ‘destiny.’

Favoring questions for different candidates could expose consumers to basic political content and an opportunity to more deeply investigate the consumer’s knowledge of a candidate’s policies—all while capturing an audience in a unique and fun way.

To build onto this, consumers could be offered a “test run” of what a society would look like with a certain “destiny” they chose. This virtual destiny could be good or bad, and could help persuade voters.

Recognition is a very important way to ensure a vote during an election. Voters are more likely to vote for a candidate they recognize. To take advantage of this reality, a simple “who is this” game could be used. The image and name of a candidate could be presented, along with random other people (not candidates) to create a fast interactive voting system that would establish the candidate’s name recognition.

Game and puzzle interactive advertising are a great way to reach consumers who do not often engage in politics. It goes far beyond what traditional advertising provides and could be the future of political advertising as we know it.

Molly Vroom has been a Senior Ad Buyer for three years. She is an expert at managing the strategy and execution of digital ad placement across all digital platforms.

Three Tips for Running a Successful Political Campaign in 2022: An Interview with Steven Ostrow >>

Maximize Your SEO Using the <H1>Tag >>

How to Use QR Codes In Advertising >>